For the handful of you yet who haven't seen this poster already, I give you Johnny Depp as Sweeney Todd, the Demon Barber of Fleet Street, in the forthcoming film version of Stephen Sondheim's deliciously dark musical directed by Tim Burton. 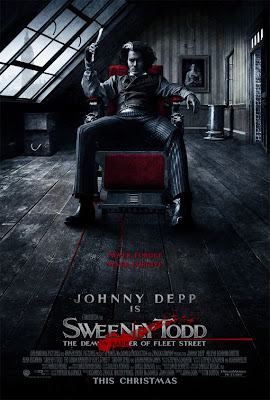 I'd be the first in line to say that Burton's been off his game lately, as dire films such as The Planet of the Apes 're-imagining' (rather than remake), the saccharine Big Fish and Charlie and the Chocolate Factory well indicate. Nonetheless, I have hopes for this one...

Thanks to Stale Popcorn for the poster.
Posted by richardwatts at 1:34 pm

i don't think i'd want anyone else making this film.

Oh yes, muchly looking forward to this one.

I actually think Burton found his groove again in Charlie, but I know I'm in the minority there.

I liked Charlie too - though it didn't replace the old one, I thought it was cruel in the same way Dahl is. And I really liked The Corpse Bride. But this is awesome!

To be fair, there were definitely elements of Charlie and the Chocolate Factory I liked, such as the attention paid to the book's many unique details (those marvelous squirrels being but one such element) but there was a certain saccharine element that crept in I disliked; ditto the backstory about Willy Wonka and his father...

I liked Charlie and the Chocolate Factory too, but Big Fish...what the hell was he on?

I don't think I've seen a Tim Burton film that didn't leave me hugely dissatisfied in some way. The only exceptions would be Pee Wee's Big Adventure and Ed Wood.

They look beautiful and the acting is usually good so Sweeney Todd should be alright if he isn't allowed to fuck with the script.